What is Obsessive-Compulsive Disorder (OCD)?

An OCD diagnosis incorporates unreasonable thoughts and fears (obsessions) leading to compulsive behaviors. Children and adults with OCD engage in compulsive behaviors attempting to end the obsessions, decrease distress and anxiety, or stop perceived bad things from happening. They perform both mental and behavioral rituals to reduce feelings associated with anxiety disorder.

What is OCD Behavior?

Typical OCD onset occurs between ages 8 and 12. Despite OCD often being treatment resistant, early intervention is key to break the behavioral pattern. So, when you see obsessive-compulsive behaviors in your child, don’t wait to seek help from a psychotherapist who specializes in OCD treatment.

What are Obsessive Thoughts?

Obsessions are uncontrollable thoughts, images, impulses, and fears that kids with OCD can't stop thinking about. For example, they may fear that they or someone else, will get sick, hurt, or die. Some commonly seen irrational fears include choking or vomiting while others present with perfectionist behaviors. Children may realize their OCD intrusive thoughts don't make sense, but they can’t seem to stop them. The thoughts lead to uncomfortable feelings, such as anxiety, fear, disgust, or doubt. Sometimes, children feel that things have to executed in a way that is “just right.” Obsessions make it hard to concentrate, socialize, and participate in daily life. For some, obsessive thinking can be quite debilitating.

Compulsions are behaviors that kids with OCD feel compelled to do repeatedly. They are repetitive behaviors or thoughts that a person engages in to neutralize, counteract, or make their obsessions go away. So, things have to be clean, safe, in order, even, or just right. OCD causes kids to feel they have to do rituals to do things in a certain way to make them feel less anxious. These children have to do things in a certain way and will start over if interrupted, which can be most observable in their play. For kids (and adults) with OCD, rituals stop bad things from happening. Common rituals include washing and cleaning, erasing things, rewriting, redoing, or rereading, repeating a word, phrase, or question much more than necessary, counting, checking, touching or taping.

What are Signs of OCD in Children?

Early signs of obsessive thinking or compulsive behaviors may be more subtle in children. In very young children, OCD behaviors can appear, but go unnoticed since they lack the communication skills to express their feelings. Instead, what you see our behaviors that reflect compulsions and obsessions. For example, children may display rigid bedtime rituals such as having to do the same behavior routinely or make a parent has to repeat a phrase every night for they get distressed.

For most children, OCD related behaviors come on gradually, but for some, a sudden onset can occur. Whenever there is a sudden abnormal onset of OCD (or any mental health issue), PANS/PANDAS needs to be considered. PANS/PANDAS stems from an infectious trigger (such as Lyme or tick-borne Disease) combined with environmental factors or other possible triggers that create a misdirected immune response resulting in a sudden onset of psychiatric symptoms.

Children with obsessive thoughts may show an excessive preoccupation with germs, dirt, illness, or with symmetry, order, and exactness. Additionally, they may focus on something bad happening or on aggressive thoughts and urges.

Compulsive behaviors may present as excessive hand washing, repeated checking, counting, preoccupation with sequencing or grouping objects, or repeatedly and excessively asking the same questions, repeating words spoken by self or others or sounds.

How is OCD Diagnosed?

Through the clinical interview process, OCD is diagnosed by a mental health professional. During intake, the clinician is trained to assess whether obsessive or compulsive behaviors are present as well as their impact on that child’s or individual's life and functioning.  For diagnosis, these behaviors have to have a significant impact on daily functioning, occupy a lot of time (typically more than one hour per day), and cause distress. No specific psychological or laboratory OCD test exists which often causes frustration.

Can my Child Outgrow OCD?

Children don’t outgrow OCD; rather, they learn to overcome it through the use of therapy and a variety of treatments. Symptoms can increase during periods of stress, as well as hormone and developmental change. There can also be a waxing and waning of symptoms, which can confuse parents but it often is part of the disorder.  Getting support early in a child’s life is key to successfully managing obsessions and compulsions.

Are OCD and Autism Related?

A high rate of individuals with Autism also have OCD. According to a Danish study of more than 850,000 people, compared with their typical peers, people with Autism are twice as likely to receive a diagnosis of OCD and people with OCD are four times as likely also to have Autism.

The Danish study also found that there is a connection between OCD and Autism at the genetic level. They found that when at least one parent had OCD, their offspring had a higher risk of Autism.

What is OCD Treatment?

OCD is treated using a variety of traditional and holistic therapies. Some people benefit from medication, and others don’t. A consistently proven effective treatment for OCD is Cognitive Behavioral Therapy (CBT) and Exposure Therapy (and more specifically Response and Prevention Therapy (E/RP).

Holistic therapies, such as Neurofeedback, Biofeedback, Reiki, EFT/Tapping, and massage can also be good adjunctive therapies to help align the nervous system. Before a person can fully move forward in clinical therapy, they need to get the Central Nervous System (CNS) regulated.

How Does CBT and Exposure (ERP) Therapy Help OCD?

Cognitive Behavioral Therapy (CBT) is a type of psychotherapy that works at the conscious level. CBT presumes that how individuals perceive a situation is more connected to their reaction than to the situation itself thus working through those misperceptions brings relief. CBT combines talk and behavioral therapy to reframe negative thinking patterns into positive thoughts.  Research has found CBT to be more effective than medication in reducing symptoms (59.9 % vs. 33.4%) and widely considered to be the first line of treatment in OCD.

Exposure Therapy, a type of CBT, specifically called Response and Prevention Therapy (ER/P), exposes the person to their trigger so they learn how to be uncomfortable to the point where they can ignore their trigger. First, the person identifies all the triggers. Next, the therapist exposes the person to the situations that trigger his or her obsessions and compulsions (sometimes starting gradually and other times addressing more moderate triggers). The therapy emphasizes learning how to deal with the uncomfortableness rather than avoiding it, as the latter leads to negative reinforcement. Patients learn that with exposure, their anxiety increases, but it also decreases.

Over time, through psychoeducation and cognitive behavioral therapy, the person’s response to triggers changes, leading to a decrease in the frequency of compulsions and the intensity of obsessions. OCD treatment and anxiety expert, Kimberly Morrow, LCSW explains “We have to teach clients that they are “feeding the dog” with negative thinking and they have to understand that OCD is a bully that they can overcome”. Therapeutic exposures repeated over time decrease associated anxiety because the individual learns that nothing bad happens when they stop performing rituals. They can stop OCD from bullying them. Cognitive restructuring is part of the process, so they learn to evaluate perceived threats associated with each obsession and then test limits. Upon completion of ER/P therapy, the OCD symptoms often diminish or disappear.

How Does OCD Impact School?

Obsessions and compulsions can interfere with learning and processing in a variety of ways. Typically, these children display slow processing and perfectionistic tendencies. They also can display difficulties with focus because they are often performing mental rituals. Finally, children may display OCD as increased emotionality or rigidity. Although signs and symptoms may be obvious, most are more subtle and misinterpreted as a focus, behavioral or processing problem. For those with sudden onset of OCD due to PANS/PANDAS, their behavior can change overnight and come on with such a frightening intensity. These children need immediate medical care from a PANS/PANDAS specialist.

How Can I Help My Child or Teen With OCD?

The best thing you can do is to get help early. Obsessions and compulsions often appear between ages 8 and 12 and shouldn’t be ignored. The longer they occur, the more behaviorally ingrained they become and therefore harder to break the “habit.” Children can become habituated toward obsessive and compulsive behaviors as a way to cope with stress. Breaking those behaviors before they become ingrained can lessen the severity and, in some cases, stop the progression of OCD.

Even when treatment has not begun until obsessions and compulsions have become more ingrained and debilitating, forms of treatments, including exposure therapy (ERP) and neurofeedback can help.

Calling a therapist with who is trained to do ERP is the first step to getting your child help. You can find a therapist through the International OCD Foundation (IOCDF).

Dr. Roseann is a mental health trailblazer, founder of The Global Institute of Children’s Mental Health and Dr. Roseann & Associates, who is, “Changing the way we view and treat children’s mental health”.  FORBES magazine called her, “A thought leader in children’s mental health”. Her work has helped thousands reverse the most challenging conditions, such as ADHD, anxiety, mood, autism, learning disability, Lyme, and PANS/PANDAS using PROVEN holistic therapies such as neurofeedback, biofeedback, and psychotherapy. She is the author of the first ever book on teletherapy activities for child and adolescent therapists, “Teletherapy Toolkit™” and It’s Gonna be OK!™ book and The Get Unstuck Program™, which are resources for parents to reverse their child’s symptoms. She is often featured on dozens of media outlets: Fox, CBS, NBC, FORBES, PARENTS, and New York Times. 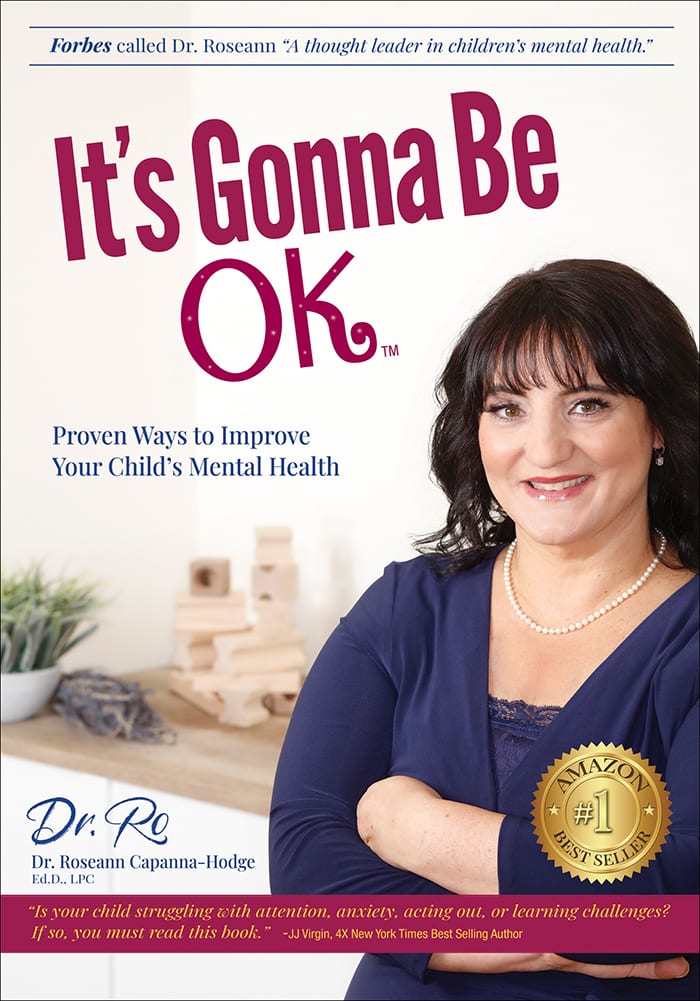